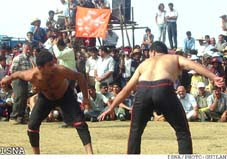 This kind of wrestling which is done now days is the symbol of bravery and formidability of this area. Gil-e-mardi wrestling has a historical root. “Zahir Al-Dean Marashi” has been mentioned, it is a custom that Deilam people (Mazanderani) anoint their youth and feed them healthy and delicious meat, honey fat … to make them stronger and prepare them to wrestle. These wrestlers have several grades as: Tangouleh or Nocheh, Pahlavan, Head Pahlavan or Miandar. This wrestling is done in an open area known as “Simbar” or “Sabzeh meidan”. This kind of wrestling is usually done in summer or festivals and wedding ceremonies. The wrestlers put on a pair of pants know as “Laspar” and bared in top, salute the viewers and show themselves by doing some actions. They call these performances “Fozoma” or “Ghezomma” after bagging, his opponent starts his wrestling by clapping. They begin firstly by punching. This may hurt one the opponents. If one of their hands touches the ground, he will defeat. The winners will be given non-cash gifts such as: cloth, mirror, shirts, sheep, cow, and so on. It is called “Baram”.
Posted by The Festivals of Guilan at 12:05 AM

The Festivals of Guilan